Congruent to its vision of ‘helping people win’, and allegiance towards encouraging a prudent savings culture in Oman, Sohar International recently conducted its August Monthly Draws worth RO 100,000 under its Sohar | Prize Scheme 2019 in the Wilayat of Ibri. 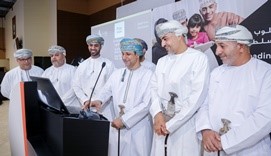 Subsequent to the announcement, an exciting audience raffle-draw took place; which was followed by presenting of a token of appreciation from the bank to the Guest of Honour by Mr Khalil Al Hedaifi.

Shedding light on the purpose of the Prize Scheme and its importance from a socio-economic perspective, Mr Khalil Al Hedaifi stated: “Our draws under Sohar | Prize Scheme serve as a golden opportunity for us to provide more prospects for winning among our customers; while aiding them in transforming their lives, and in turn contributing to the overall prosperity of the nation. That’s not all – the draw venues also serve as an opportunity for us to interact with customers more frequently and understand their aspirations and requirements; which goes a long way in helping us present them with suitable propositions for their ever-changing world.”

To be eligible to participate in the General and Wealth Management monthly draws, customers are required to maintain a minimum monthly average balance of RO 100 and RO 40,000 respectively therefore giving those that save more a higher chance of winning.

“On behalf of Sohar International, my heartiest congratulations to the monthly draw winners. I hope winning this draw motivates other customers to continue saving as a means to secure their future, as well as that of their families; whilst maximizing their chances of winning with Sohar International’s Prize Scheme 2019”, Mr Khalil Al Hedaifi added.

Providing customers with more value, Sohar International conducts other regular draws including Weekly Draws of RO 4,500, Quarterly Draws which will be held in October 2019 giving away more than RO 200,000 in total; that are equally split between two customers from the General Segment and two customers from the Wealth Management Segment. The biggest prize of the year given by the bank in 2019, however, are the Year-End grand draws, that will give away a total of RO 400,000; that will be distributed equally between four customers; two from the General Segment and two from the Wealth Management Segment.

The Prize Scheme for the year 2019 has also introduced new draws for 2019 which includes Salary Transfer Monthly Draws for customers who transfer their salaries (of a minimum of RO 500) to Sohar International account by the end of each month. The lucky winners of the Salary Transfer Monthly Draws will receive a total of RO 5,000, distributed equally between 10 winners each month. In addition to this, the bank has also introduced two new draws to celebrate special occasions, namely Omani Women’s Day with RO 10,000 equally split between 10 winners; and the 49th National Day with RO 49,000 to be won by 49 customers equally.

Sohar International understands that promoting and rewarding a healthy saving habit does not only help individuals realise their dreams, but also has a positive impact on a national socioeconomic level. The Bank is hence on constant pursuit to redefine banking by raising the bar on customer-centricity and helping customers win and achieve their goals in an ever-changing world.