In-line with its on-going efforts to promote traditional Omani culture at sporting events across the nation, Sohar International recently served as Gold Sponsor of Nakhal Shooting Competition. Held under the auspices of HE Saif bin Mohammed Al Shabibi, Oman’s Minister of Housing, and organized by Nakhal Shooting Team, the event was graced by the attendance of representatives from both the public and private sectors, as well as enthusiastic participants from across Oman. During the closing ceremony, Mr Khalil Al Hedaifi, Chief Retail Banking Officer at Sohar International received a token of appreciation from the organizers in recognition of the Bank’s support. 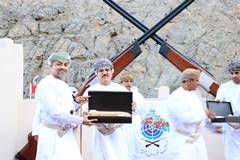 Commenting on the sponsorship, Mr Khalil Al Hedaifi said, “Shooting sport is an integral part of our culture, heritage and tradition, and we at Sohar International are always keen to engage with the community in such activities and help in preserving traditions for future generations. Our vision in doing so is to help people win in whatever they do and give them opportunities to realize their full potential, especially when it involves youth who will soon take charge of continuing our nation’s proud development journey”.

Committed to positively impact the lives of people in the Sultanate, Sohar International’s CSR efforts engage the local communities across the nation and contribute to a diverse range of conventions that aim to making a meaningful change.