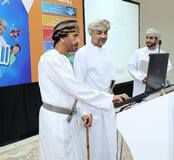 Reiterating Sohar International’s efforts to rewarding customers, Mr Khalil Salim Al Hedaifi, Chief Retail Banking Officer at Sohar International commented, “In our drive to become a world-class leading Omani service company, we are increasingly focusing on offering exceptional banking experience to our customers in everything that we do. Our prizes as part of Al Mumayaz Savings Scheme 2018 are designed to reward customers for their financial prudence, help them win and safeguard their lifestyle and the security of their families. We look forward to our Year’s End prize draws, which will deliver a total of 330,000 Omani Riyals to lucky customers nationwide”.

It is worth noting that Sohar International recently held Al Mumayaz Savings Scheme’s 10th monthly draws at an event held in Sinaw under the auspices of H.E. Sheikh Abdulaziz Salim Al Abdusalm, Wali of Al Mudhaibi. The event revealed the names of 45 lucky winners recognized for their savings in the General, Children, Women, Exclusive and Special Branch categories.

Mr Khalil Hedaifi was joined by members of the management team in welcoming guests to the tenth monthly draw in 2018. Following the famous Omani hospitality, the event started with a welcome note by Mr Al Hedaifi who shed some light on the exciting prospects of the savings scheme. Two guests from the locals delighted audiences with inspiring poetic expression followed by conducting the monthly draws. As a treat for the attending guests, the bank held special raffle draws for guests at the event. The event came to a close with a token of appreciation being presented to H.E. Sheikh Abdulaziz Salim Al Abdusalm, Wali of Al Mudhaibi, followed by a group photo with the Guest of Honour and the attending members of Sohar International’s management team