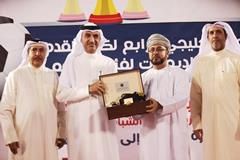 The academy team flew its team to Bahrain where they competed against 15 clubs from across the region, vying for victory in an exciting four day competition. The academy represented Oman in the tournament showcasing talent of juniors aged 11-12, making it through to the second round with a sterling performance in all matches. The participation was crowned by the talented Mishary Khalid Al Mukhaini voted Best Player at the festival in his demonstration of exceptional skills that scouts believe will be valuable to the future of football in Oman. During the closing ceremony of the event, Mr. Salim Al Maskari, Head of Sohar Islamic presented a token of appreciation to H.E. Hisham Bin Mohammed Al Jowder, Minister of Youth and Sports of Bahrain.

Commenting on the sponsorship, Mr Salim Khamis Al Maskari, DGM and Head of Sohar Islamic, said, “Supporting local youth remains a priority for us in our engagement initiatives as a community focussed financial institution. From a talent perspective, Oman has plenty and this regional tournament was a great opportunity to deliver a positive social and sporting experience for our youth, whilst promoting Oman’s emerging culture of sport and healthy lifestyles. It was a pleasure to enable youngsters and see the success of the academy in Bahrain were national pride was as palpable as ever through team spirit, demonstrating exemplary discipline, goal setting, perseverance, and the will to succeed; all skills that are crucial in life overall, not just in football.” 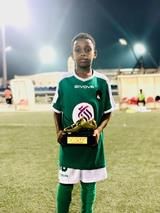 Sohar Islamic has a long-standing commitment to youth cultural and sporting agenda, with sponsorships covering football clubs and matches, camel races, cultural gatherings and Quran memorization and recital contests. With football being the most popular sports in Oman, Sohar Islamic previously supported the finals for OFA’s HM Cup Championship, in addition to sponsoring the Trade Union Football Tournament, and Mohammed bin Jaffer Al Azkawi School’s Football Team, who represented the Sultanate in Qatar at the Jeem Cup with 1,200 children participating from across the region.