Bank Sohar was recently honoured by Special Olympics Oman during the association’s Annual Awarding Ceremony, in recognition of its longstanding support to the association for over five years. The event was held on Monday, 26 February at Al Shafaq Club under the auspices of H.H. Sayyid Faisal bin Turki Al Said. Representing Bank Sohar at the event were Mr. Mazin Mahmood Al Raisi, Senior AGM- Marketing and Customer Experience and Mrs. Maha Hussain Al Lawati - Events and Promotions Manager, Marketing Department. 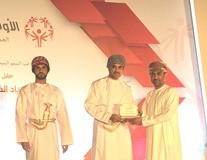 The event highlighted last year’s achievements by the special Olympic athletes during a movie ‘Hasad’ that was screened at the event, spotlighting the success of the World Winter Games in Austria where athletes won Gold, Silver and Bronze medals amongst other accomplishments. Following the Hasad presentation, the ceremony was hallmarked by the launch of Special Olympics Oman’s development programme called the Leadership Academy dedicated to athletes and individuals with intellectual disabilities. The programme is specially developed to enhance the managerial, technical, and leadership skills to successfully integrate individuals with intellectual disabilities into society. Before the closing, private and public organizations were honoured for their support, where Mr. Mazin Mahmood Al Raisi, S. AGM and Head of Marketing and Customer Experience, Bank Sohar received the award from H.H. Sayyid Faisal bin Turki Al Said.

Commenting on the bank’s commitment towards community causes, Mr. Sasi Kumar, Acting CEO, Bank Sohar said, “Bank Sohar has always upheld its role as a community oriented financial institution with a strong focus on empowering every section of Oman’s local societies. While we are no doubt proud to be honoured by the Special Olympics Association, it gives us even greater pride to have been instrumental in the association’s noble mission of rehabilitating Oman’s differently-abled citizens. We are honoured to be part of the success of these strong individuals who represent remarkable athletic abilities and prowess on an international scale, winning honours for themselves and the country. On behalf of everyone from Bank Sohar, I would like to thank the association for this prestigious honour and encourage them to continue with their mission find new frontiers for Oman’s special needs citizens.”

The Bank has offered consistent support to the Special Olympics Oman since 2012. It joins the list of other non-profit and community organisations that the bank is supporting through regular contributions under its CSR arm “Sohar Alataa”.

“We are grateful to Bank Sohar’s support, which has enabled us to implement successful outreach programmes and inspired many special sports talent for the Special Olympics. Thanks to Bank Sohar for also setting a precedent of active community engagement and support for the rest of the private sector in Oman,” Vice President Saif Al Rabeei Special Olympics Oman said.

Bank Sohar’s support to the association forms part of a comprehensive social outreach programme under Sohar Al Atta. This includes initiatives directed at child care centers, associations devoted to disability causes and charity associations and much more. Over the years, Bank Sohar has supported over 30 organisations numerous times around the Sultanate under its social responsibility program striving to ensure that its contributions are carefully planned and evaluated in order to reach the maximum number of people - especially those in most need of it - offering recipients positive support and making meaningful change.

In recognition of its contributions, Bank Sohar has received numerous accolades for its CSR efforts locally, regionally, and internationally. The most recent of these awards was Royal Oman Police “Road Safety Award 2017” in its third edition, where the Bank is recognized as the first private financial organization to win this prestigious award. The bank also won the ‘Golden Order of Merit in the field of CSR’ from the Arab Organization for Social Responsibility in UAE. This award is the fourth that the Bank has received from the Arab Organization for Social Responsibility for this category.

Special Olympics is a global movement that operates in more than 170 countries and aims to create a new world of inclusion and community, where individuals are accepted and welcomed, regardless of ability or disability. In 2010, Special Olympics Oman was established by a ministerial decree from the Ministry of Social Development with plans to integrate people with intellectual disabilities into society. Through its programmes, they help develop the behavioural, physical, and professional skillsets of members. Its mandate is centered on raising awareness on the needs of people with intellectual disabilities.