In an ever-changing world, Sohar International continues to play a pivotal role in identifying emerging trends, providing its customers and the society at large with more vision, more value, and more velocity. As part of its value proposition, Sohar International organised the seventh edition of its pioneering initiative ‘Viewpoints – Sohar International Chairman’s Forum’ recently. The virtual session hosted well-known journalist Ms. Mina Al-Oraibi, Editor-in-Chief of The National newspaper and attracted a wide-ranging audience including dignitaries, journalists, and students. 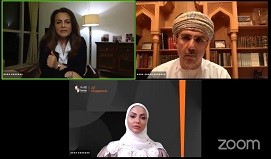 Highlighting the importance of the forum as an effective platform for sharing global insights, Mr. Mohammed Mahfoudh Al Ardhi, Chairman of the Board of Directors at Sohar International gave a compelling speech to the audience in which he stated, “We need more than ever before to race ahead in the field of knowledge today by learning and benefitting from the multiple human experiences and success of others around us. Such experiences should motivate us to strive ahead and achieve success, especially in light of the current exceptional circumstances and the challenges posed to the world by the ‘Covid-19’ pandemic, which has led to major changes across sectors, including the media.”

He added, “The media industry is going through a sharp turn under the influence of accelerating technological developments, especially during the current circumstances. Industry experts foresee the end of publications in a printed format within the next decade or two. The media industry’s initiative to transform onto digital platforms has seen them being pitted against dominant international internet and technological companies for a share of the digital advertising market. Moreover, media organisations are also under pressure due to rapid technological developments that are changing people's reading habits.”

Following this, Ms. Mina Al-Oraibi presented the reality of the media industry as it stands today, highlighting the challenges facing its institutions. She noted that, “The current conditions resulting from the 'Covid-19' pandemic has prompted media organisations to rapidly transform themselves onto digital platforms, as the closure of a number of activities and a ban on the movement of individuals has forced reporters and employees to work from home.”

She added, “The digital transformation of media was expected for a long time, but the current circumstances have accelerated this to become a reality and an inevitable option. For the first time in history total international spending on digital advertisement has exceeded the traditional advertising market, as the former acquired 55% of the total international advertising market of $530 billion.”

She pointed out that, “Digital transformation will contribute significantly to the speed of obtaining information and continuous communication with readers through the various social media outlets. The media industry in many countries is asking readers to pay for what they read. This is the prevalent model in the United States of America. The model gives accurate information in terms of registered readers and better insights in terms of the return on investment and this is something that must be put to better use in the Arab world in order to protect digital media in the face of the challenge posed by huge technological institutions.”

Ms. Mina Al-Oraibi emphasised the importance of the media turning into a real digital medium as the current circumstances have hard pressed advertising revenues of media organisations apart from studying the current indicators of digital reality in the Arab world very well. “The numbers indicate that the total Internet users in the Arab world have reached 183 million users, and there are over 133 million accounts on Facebook in the Arab world, and these numbers deserve to be studied well by Arab media organisations to benefit from them in the near future.”

She concluded her speech by saying, “It is important for media organisations to diversify their material and programmes to keep pace with the growing needs of their readers. They should not be satisfied with just passing on mere information as readers are looking for exclusive and insightful news. My sincere thanks to all our viewers and followers for joining us this evening.”

The virtual evening broadcast live on Sohar International’s YouTube channel and on the Zoom platform witnessed a wide interaction, where many themes and questions were raised addressing the challenges facing the media and the future of the industry in light of the rapid changes and how these could be overcome.

Viewpoints is a dedicated platform where inspirational global leaders share their experience, knowledge and ideas. Through this one-of-its kind initiative, Sohar International seeks to provide a unique opportunity for viewers to gain insights and engage in a dialogue with international stalwarts on key issues. The essence of the forum is captured succinctly by the phrase - ‘Global Ideas, Local Impact.’

It is worth mentioning that Viewpoints – Sohar International Chairman’s Forum witnessed wide interest following its success during its previous editions, featuring international leaders and prominent personalities. The 6th edition of Viewpoints featured His Excellency Lord Grimstone of Boscobel Kt, Minister for Investment jointly at the Department for International Trade and the Department for Business, Energy and Industrial Strategy, The United Kingdom, who offered a comprehensive picture of expected long-term changes in a post COVID-19 world, the 5th edition hosted the globally renowned Spanish architect and sculptor - Dr Santiago Calatrava, while the 4th edition hosted Mr. George Yeo Yong-Boon, a Singaporean former politician, business executive, and Senior Advisor to Kuok Group and Kerry Logistics Network, and he spoke about the Impact of the ‘Rise of China in Asia and Middle East and its role in politics and economics.

The 3rd edition of the Forum hosted His Excellency Guðmundur Árnason, Permanent Secretary at the Ministry of Finance and Economic Affairs in Iceland, who elaborated on some of Iceland’s economic experiences with a focus on the country’s financial challenges and how they influenced Iceland’s new organic budget law. The first edition of Viewpoints forum witnessed His Excellency Mohammad Abdulla Al Gergawi, Minister of Cabinet Affairs and the Future of the United Arab Emirates as a guest speaker who tackled the importance of Future Foresight and how it can impact overall development.