In an effort to drive positive transformation while reaffirming its role as an important contributor to enhance Oman’s socio-economic scenario, Sohar International recently concluded the fifth edition of its Chairman’s Forum - ‘Viewpoints’ hosting the globally renowned Spanish architect and sculptor - Dr Santiago Calatrava. The captivated audience witnessed him give a compelling and insightful session on ‘Architecture as an Art – From Sculpture to Architecture’. 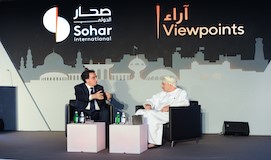 Ardhi, Chairman of the Board of Directors at Sohar International who gave a compelling speech to the audience inaugurating the evening. Also present at the event were the executive members of the Bank’s management including the Chief Executive Officer, Mr Ahmed Al Musalmi alongside guests comprising of every key group of economic contributors, including public officials, dignitaries, business chiefs, academics, students and entrepreneurs. Held at the Grand Hyatt Muscat on 5 February 2020, Viewpoints – Sohar International Chairman’s Forum aimed at fostering new inspiration through the exchange of knowledge and ideas globally from the architecture world to the esteemed guests. The venue provided a walkthrough exhibition consisting of various photographs depicting the Sultanate’s rich architectural heritage.

The insightful event began with a welcoming note followed by a short video display of Oman’s architectural marvels. Mr Mohammed Mahfoudh Al Ardhi, Chairman of the Board of Directors, Sohar International then took stage to say a few words setting the tone for the evening.

Highlighting the importance of forums like Viewpoints, he said, “Sohar International’s ‘Viewpoints’ forum serves as a platform to provide the Omani population with an opportunity with valuable insights and thought provoking engagement with eminent leaders sharing their experiences, knowledge and ideas on a global perspective. We are proud to have internationally renowned, award-winning architect Dr Santiago Calatrava Valls of Calatrava International, who is the esteemed speaker at our first edition of Viewpoints this year. We thank him for sharing such great insights with us and some key takeaways to help understand the concept of ‘Architecture as an Art’”

The evening then proceeded towards the keynote speech and presentation on ‘Architecture as an Art – From Sculpture to Architecture’ by Dr Santiago Calatrava inspiring the audience. The event was then followed by a short discussion and a Q&A session which eventually concluded with a token of appreciation being given to the guest speaker.

Expressing his appreciation on architectural history of the nation, Mr Mohammed Mahfoudh Al Ardhi said: “Architectural marvels have the power of becoming globally recognised symbols associated with a city. The evolution of architecture is a measure of a nation’s civilization and Oman’s castles, forts and houses are a testament to its rich architectural style. Our traditional monuments and houses blend functionality with stylistic elements effortlessly. Moreover, their understated magnificence and grace is unmatched across the Arab world.”

Sohar International has also partnered with Calatrava International to work on the Bank’s upcoming Headquarters in the Sultanate. The building will be the architect’s first project in Oman and is expected to be a qualitative addition to Sohar International’s vision of positioning Oman on the global map.

Expressing his views, Mr Ahmed Al Musalmi, Chief Executive Officer, Sohar International said,” As a part of our long term strategy and fulfilling the purpose of helping people ’win’, Sohar International organises Viewpoints’ – the Chairman’s Forum that promotes thought-provoking series of talks from world-renowned leaders. Viewpoints thus serves as a great platform to discuss insights on global market trends and how ideas can be implemented that upgrade the Omani market in accordance to the globalising world. This helps us deliver on our promise of providing ‘winning’ strategies for customers’ by bringing the best of the world to Oman and taking the best of Oman to the world.”

“We are also at an exciting inflection point of our journey towards a world leading Omani Services Company with the announcement of our new Headquarters in Oman. The guest speaker of this edition of Viewpoints, Dr Santiago Calatrava, is also the visionary that is helping us translate this forward-looking vision into reality. The new building will be the first-of-its-kind in the world and will bring an architectural revolution to Oman’s cityscape. It will also help us serve our customers better by providing them with an attractive, technologically advanced, efficient, and effective banking facility. By infusing our strategic vision to the building’s functionality, our new head office will help us in providing more vision, more value and more velocity to our customers’ daily lives and employees work environment. It also represents an expansion of Sohar International’s investment and reinforces our commitment towards the country’s progress.”

Dr Santiago Calatrava is an internationally recognized and award-winning Spanish architect known for work on monumental bridges, museums, universities, and skyscrapers around the world. Some of his famous designs include the Bac de Roda Bridge in Spain, the Quadracci Pavilion at the Milwaukee Art Museum, and the Museum of Tomorrow, Rio de Janeiro. He is classed among the elite designers of the world, his design styles are known for bridging the division between structural engineering and architecture. For some of his projects, he is known to continue the tradition of Spanish modernist engineering with a very personal style that derives from numerous studies of the human body and the natural world.

Speaking at the event, Dr Santiago Calatrava said, “I believe to understand any architectural project, one must look at it as an art form that has been derived from the development of concepts and personal touch of its designer that introduces his/her trade-mark style. I am honoured and equally humbled to be asked to share my knowledge with such dedicated and committed people who are interested to learn about this structural art form. I would like to thank Sohar International for inviting me and providing me with an opportunity to speak at this stimulating forum.”

Viewpoints has been gaining traction from target audiences following successful sessions; where it has hosted dignitaries such as Mr George Yong-Boon Yeo, a Singaporean former politician, business executive, and Senior Adviser to Kuok Group and Kerry Logistics Network in its last edition to speak on the topic ‘Asia’s growing role in the politics and economics of The Middle East’. The first edition of Viewpoints forum witnessed His Excellency Mohammad Abdulla Al Gergawi, Minister of Cabinet Affairs and the Future of the United Arab Emirates as a guest speaker who tackled the importance of Future Foresight and how it can impact overall development. While Viewpoints’ second edition featured Sir Gerry Grimstone, Chairman of Standard Life Aberdeen, one of UK’s largest savings and investments businesses, who delivered a speech entitled ‘The World is Changing – a Chairman’s View’. The third edition hosted His Excellency Guðmundur Árnason, Permanent Secretary at the Ministry of Finance and Economic Affairs, Iceland speak upon Iceland’s economic experiences with a focus on the country’s financial challenges and how they influenced Iceland’s new organic budget law in 2018.