Extending its celebrations of Omani Women’s Day, Sohar International recently sponsored the Ministry of Education’s event marking Omani Women’s Day. The event was in commemoration to the contributions of Omani women to the progress of the Sultanate. On the side lines of the event, Sohar International conducted its Sohar | Prize Scheme Women’s Draws announcing 10 lucky female customers bank-wide winning from a pool of RO 10,000. 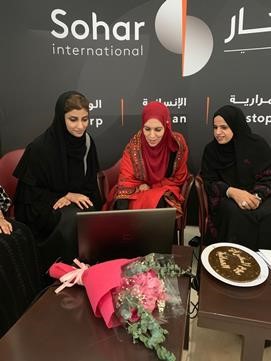 recitation and a melodious musical note played by a local female band. Conducting the dedicated Women’s Draws under the Prize Scheme was Sayyidah Sana Hamad Al Busaidi, Advisor to the Minister of Education, where 10 lucky Sohar International female customers were revealed each having won RO 1,000.

Speaking on the sidelines of the celebrations, Mr. Khalil Al Hedaifi, Chief Retail Banking Officer at Sohar International, said: “Omani Women's Day is a reminder of the unparalleled contributions made by generations of Omani women to the progress of this country. We at Sohar International are proud to be sharing this day with such inspiring women. We feel we must honour the women who have excelled across all spheres of life and sprinted ahead with the baton of the progress for the country forward.”

Congratulating the winners and reflecting on the prize, Mr. Khalil Al Hedaifi added: “Our Sohar | Prize Scheme Omani Women’s Day Draws is a testament to the gratitude we hold for our female customers, and serves as a golden opportunity for us to provide them more prospects for winning. We congratulate each and every winner and encourage others to continue saving with Sohar | Prize scheme as we approach the year end grand draws.”

Sohar International has become known for supporting female entrepreneurs and business owners as a means of empowering them within the world of local enterprise, contributing to exhibitions for small and medium enterprises, amongst other initiatives. Several non-profit organisations devoted to women’s welfare also remain the focus of the bank’s community focussed CSR initiatives in its aim to empower female across the nation.