After three weeks of intense nightly fixtures that showcased the in-house sporting talent of Sohar International, the bank recently concluded its annual Ramadan Football Tournament for staff. Conceived as part of its initiatives to promote a healthy lifestyle and team spirit among its staff, the annual tournament turned out to be a huge success. 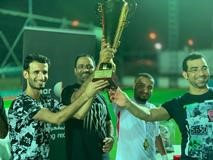 A total of eight teams, representing various departments of the bank, fought hard for top honours during the matches staged at the Al Athaiba Football Field. The teams faced off each other in a series of tight matches evincing a strong passion for football. Both the team, as well as spectators shared the national love for the game, while illustrating Sohar International’s goal to promote the spirit of competitiveness and winning among its employees.

Speaking on the side-lines of the tournament’s finale and winner awarding ceremony – Mr Ahmed Al Musalmi, Chief Executive Officer of Sohar International commented: “Building a competitive and winning team requires dedication similar to that of international winning athletes with their laser sharp focus on goals. Considering that football is the most popular sport in the Sultanate, this tournament is a perfect opportunity to bring our people together, offering them a platform to showcase talent, sportsmanship, teamwork, and our brand personality of being Sharp, Human, and Unstoppable. We are proud of how all the teams performed to their best throughout the tournament making every single player a winner in his respective role. With initiatives such as this one, we continue to nurture a winning culture among our staff who we trust to extend this winning spirit to everything they do and offer to our customers.”

Remarking on the enthusiastic performance of the teams, Ms Mahira Saleh Al Raisi, Assistant General Manager & Head of Human Resources, said: “The Ramadan Football Tournament was exciting from start to finish and surpassed all expectations considering the strength of participation, zeal of players, spirit of solidarity and sportsmanship exhibited throughout the game. Through events of this nature we seek to encourage our staff to build cohesive relationships with each other and bond together to achieve the common goal of winning.” 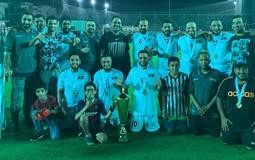 The Football Tournament drew wide support from the non-participating staff as they gathered and cheered loudly at each match. Even the top management had been assigned teams and were at the forefront encouraging their respective teams by virtue of their presence.

“The fun moments away from the office, are of great potential for employees to deepen their group spirit, increase job satisfaction, and boost team morale. The presence of family members and supporters on the ground added an element of festivity to the tournament and served as recognition of the staff’s camaraderie, hard work and dedication.” Concluded Mahira.

Organised by Sohar International’s Human Resources Department, the annual Ramadhan football tournament, is highly anticipated by the zealous staff and forms part of the bank’s endeavour to building a positive, healthy, competitive, and winning work environment. The inspiring work culture at Sohar International builds strong sportsmanship spirit while combining both healthy competition and the spirit of camaraderie making it the ‘employer of choice’ for current and prospective staff.