Strengthening its commitment to encourage and empower the Omani youth, Sohar International recently announced that it has proudly become the Exclusive Sponsor for the Sultanate’s 15 year old racing sensation, Shihab al Habsi. The partnership was announced during a special event at the Sheraton this week under the auspices of H.E. Sheikh Saad bin Mohammed bin Said al Mardhouf al Saadi, Minister of Sports Affairs, which also revealed Shihab’s racing program for 2019.

Reiterating the bank’s dedication to the development of Omani youth, Mr Mohammed Mahfoudh Al Ardhi, Chairman of Sohar International, said, “Sohar International continues to align its efforts to those of the national agenda in the areas of human growth and development, and has demonstrated a strong investment in the enrichment of the society overall and the youth in specific. Shihab is an exceptional young Omani talent with a bright future ahead of him, and we are proud to support him in his journey to success and wish him all the best in raising the Sultanate’s flag high regionally and internationally.”

Sohar International is unswerving as a facilitator of socio-economic growth, paying significant attention to supporting young Omani talent, especially in the field of sports, with the aim of enhancing the Sultanate’s profile in international arenas. 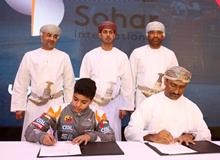 Commenting on Sohar international’s strategic role in sponsoring formula 4 champion Shihab Al Habsi, Mr Ahmed Al Musalmi, Chief Executive Officer of Sohar International said: “Being sharp, human, and unstoppable are key attributes to any winner and that exactly what defines Sohar International under its new brand strategy. We have been witnessing Shihab’s journey and he is a true reflection of these attributes as he relentlessly competes against more established and experienced competitors. His potential is immense and coupled with his attributes align well with Sohar International’s purpose to help people win in their ever-changing world. We wish Shihab all the best.” 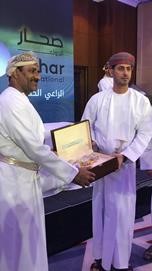 With Sohar International resolutely partnered by his side, Shihab Al Habsi is geared up for 2019, “I am extremely grateful for the support of Sohar International which will enable me to focus on my goals. I look forward to representing Oman in international championships and I hope I can make the nation proud.” He said.

Since inception, Sohar International has continuously progressed as a community focused organisation and a frontrunner in contributing towards sporting events that encourage professionalism, sportsmanship and teamwork within the community. Over the past years, the Bank has partnered with renowned Omani rally driver Khalid Al Minji and has served as the Gold Sponsor for the Al Amerat Challenge Race and many other initiatives targeting youth.