Sohar International conducted the second round of weekly draws under the new Sohar | Prize Scheme for the year 2019 which was recently launched under the theme ‘Now That’s Winning’. The second weekly draws, held in Sohar International’s Al Khaboora Branch under the auspices of Sheikh Hassan Ali Al Fairouz and attendance of many customers from Willayat Al Khaboora, saw four lucky customers walking away with OMR 1,000 each under the General Segment as well as five lucky winners from the Minor Accounts Segment having received OMR 500 split equally between them. 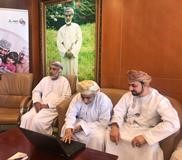 Mr Khalil Salim Al Hedaifi, Chief Retail Banking Officer at Sohar International stressed on the importance of the Prize Scheme in promoting a strong savings culture in Oman. The objective he noted is multifaceted; it helps to instil prudent finance management practices in the society while also rewarding lucky winners with cash prizes that can drastically change their lives. He said “Our Prize Schemes has been growing in popularity each passing year. It is encouraging to see that our schemes have made a visible positive impact on the savings habit of many customers, and have now increased their opportunities to win in the Weekly, Monthly, Quarterly and Year-End Grand Draws.”

The attractive weekly prizes are designed to give constant incentives to customers to start saving. Eligibility to these weekly draws is a minimum average balance of OMR 100 in the last 30 days before the draws.

Highlighting the theme of the new Prize Scheme, Mr Khalil Al Hedaifi added: “The new Sohar | Prize Scheme for this year reflects Sohar International’s customer-centric philosophy to help them win and achieve their ambitions, and hence the Prize Scheme’s theme ‘Now That’s Winning’. With two weekly draws already rewarding 18 customers, we are looking forward to the third weekly draws for a total of OMR 4,500 and also the upcoming monthly draws with a total prize of OMR 107,000.”

In addition to the weekly draws, the bank is already getting ready to conduct its first Monthly Draws, which will offer prizes worth OMR 100,000 equally split between four customers; two from the General and two from the Wealth Management Segment. Moreover, the monthly draws event will also reveal the winners from the Salary Transfer segment, rewarding 10 winners with OMR 500 each. Catering to youth aged 18 to 25, the event will also reveal 10 lucky winners of OMR 200 each.

For the months of March and September, the bank will conduct Quarterly Draws, which will give away OMR 200,000 in total equally split between two customers in the General segment and two customers from the Wealth Management segment. The biggest prize of the year will be in the 2019 Year-End grand draws, giving away a total of OMR 400,000 distributed equally between four customers; two from the general segment and two from the wealth management segment.

Additionally, Sohar | Prize Scheme for the year 2019 introduced four new draw categories for the first time, including Youth and Salary Transfer monthly draws, along with special occasion draws namely the Omani Women’s Day with OMR 10,000 in total for ten winners, and the 49th National Day with OMR 49,000 to be won by 49 customers.

All prize accounts will have four chances for every eligible minimum average balance maintained in their accounts for any of the draws, while Minor accounts will enjoy double these chances as an effort from Sohar International to encourage the little ones to adopt a culture of saving and financial prudence. The Sohar I Prize Scheme 2019 is not exclusive for accounts in Omani Riyal only; saving accounts that are maintained in AED, GBP and USD are also eligible to participate in the Sohar | Prize Scheme 2019. For those seeking to save without participating in the prize draws, they can instead choose interest bearing accounts.

For over a decade, Sohar International has enriched the life of its customers with fast-paced, cutting-edge financial solutions which further reflects on the Bank’s new purpose of promoting a winning spirit in the community.