Sohar International recently announced the First Quarterly Draws winners under the Sohar | Prize Scheme 2019 in line with the bank’s celebrations of its twelve years of successful operations within the sultanate. The winners; two from the General category and two from the Wealth Management category received a total of OMR 200,000 distributed equally amongst them. Graced by His Excellency Sheikh Awadh Abdullah Munther Al Mandhari, the Wali of Wilayat Saham, the Quarterly Draws event was held on the 10th April in Wilayat Saham, and attended by more than 450 guests, including dignitaries, customers and members of the bank’s management team. 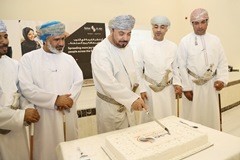 The Quarterly Draws event festivities started with a welcome note followed by a speech by Mr Khalil Al Hedaifi, Chief Retail Banking Officer to mark the special occasion. After an entertaining local poetry recital, Al Hedaifi was joined by Guest of Honour on the stage to conduct the first Quarterly Draws in the General and the Wealth Management categories. Esteemed guests then joined in to cut the cake marking the 12th Anniversary of Sohar International. The VIP social gathering and the first Quarterly Draws came to a close with the Guest of Honour being given a token of appreciation by the bank officials and a group photo.

In his speech, Mr Khalil Al Hedaifi, Chief Retail Banking Officer stressed upon the importance of the bank’s renewed vigour towards customer-centricity and on the legacy of banking excellence that the bank has strived to achieve for the past 12 years. He said, “Marking twelve years of banking excellence; we are very delighted with the success and progress that Sohar International has achieved in a relatively short period of time. Driven by our purpose to help customers ‘win’ and realize their aspirations, we remain focused on providing them with unparalleled banking experience that respond to their ever-changing world and reflect our brand personality of being Sharp, Human and Unstoppable.” 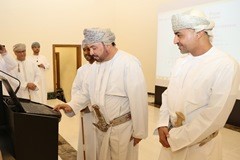 “Our Prize Scheme has already rewarded more than 130 customers with cash prizes this year, and the recent Quarterly draws offered a total of OMR 200,000 to four lucky customers. Going forward, there are still plenty of opportunities for our customers to win and realize their dreams through weekly, monthly, youth, salary transfer and special occasions draws, along with our grand prize of OMR 400,000 in the Year-End Draws”, Al Hedaifi added.

Offering customers more chances to win, Sohar International conducts other regular draws including Weekly Draws of OMR 4,500 for nine winners, monthly draws giving away OMR 100,000 in total equally split between two customers from the General segment and two customers from the Wealth Management segment. The biggest prize of the year will be in the 2019 Year-End grand draws, giving away a total of OMR 400,000 distributed equally between four customers; two from the general segment and two from the wealth management segment.

Additionally, Sohar | Prize Scheme for the year 2019 introduced new draws including Salary Transfer Monthly Draws for customers who transfer their salaries (of a minimum of OMR 500) to Sohar International account by the end of each month; rewarding lucky winners in these draws with a total of OMR 5,000, distributed equally between 10 winners each month. Moreover, Sohar International introduced two new draws to celebrate special occasions, namely the Omani Women’s Day with OMR 10,000 equally split between ten winners, and the 49th National Day with OMR 49,000 to be won by 49 customers.