Empowering women in support of His Majesty Sultan Qaboos bin Said’s vision for nation building, Bank Sohar marked Omani Women’s Day by organizing a special dinner reception for its female employees at the Grand Hormuz Hotel in Muscat, reaffirming its commitment to champion female employees with a focus on their career prospects and continued growth as key assets in the nation’s overall development. 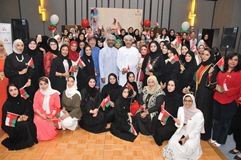 Mr Ahmed Al Musalmi, CEO of Bank Sohar, said, “We are committed to providing an inclusive work environment where all employees can contribute to their own progress and the bank’s growth, thus the ongoing empowerment of our female workforce is paramount alongside that of their male colleagues. Bank Sohar is proud to embrace the attributes of women and consider them important to our growth in the delivery of banking excellence. Our celebrations of Omani Women’s Day reflect the gratitude we hold for our female employees amidst national celebrations of women for their contribution to His Majesty’s vision, with many now at the forefront of key multiple key economic industries. We congratulate and encourage all women to go forth and lead by example as we build a nation worthy of international acclaim”.

Bank Sohar regularly affirms its position as an agent for the cause of gender equality, supporting the development of women in the workplace with balanced recruitment policies, on-going skill acquisition and leadership coaching programmes, a robust human resource strategy, and entrepreneurial support for females that gravitate to the business sector. The bank retains a strong and growing percentage of women in all its various ranks, including and not limited to executive management.

Bank Sohar has become known for supporting female entrepreneurs and business owners as a means of empowering them within the world of local enterprise, contributing to exhibitions for small and medium enterprises, amongst other initiatives. Several non-profit organisations devoted to womens’ welfare also remain the focus of the bank’s community focussed CSR initiatives in its aim to empower female across the nation, conducting programmes with partners such as Dar Al Atta in the ‘Banat Sidab’ initiative to train women on how to start, sell, and operate a micro home-based business.