Bank Sohar has received a commendation from the Central Bank of Oman (CBO) for its success with ‘Rakiz Wa Souq’ (Focus and Drive) Road Safety Campaign, a highly impactful campaign that claimed First Place at the ROP Road Safety Awards. Accepting a letter of recognition and certificate on behalf of Bank Sohar was Mr. Mazin Mahmood Al Raisi, Senior AGM and Head of Marketing and Customer Experience, which were delivered by Ms. Hajar Qamber Al Ajmi, representative of the Road Safety Committee at CBO and member of traffic safety projects evaluation – privet castor at ROP. 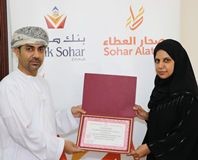 Recognizing the achievement of Bank Sohar, His Excellency Tahir bin Salim bin Abdullah al Amri, Executive President of the Central Bank of Oman said: “We congratulate Bank Sohar on achieving the first place at the ROP Road Safety Awards and commend their strong community-focused outlook that has yielded positive impact across Oman”. His Excellency added “we look forward to seeing similar impactful initiatives across the sector to promote road safety in the community.”

Commenting on the bank’s latest honour, Mr. Mohammed Mahfoudh Al Ardhi, Chairman of Bank Sohar, said, “We cannot overstate the importance of road safety and our commitment towards the cause in local communities. We thank the CBO for recognising the passion that remains invested in this matter across the team at Bank Sohar; moreover we hope that our work has helped to inspire safer roads for future generations. We will continue to work with public, private and civil organizations towards this end, and we thank all those who support this critical cause across Oman, notably the honourable efforts of the Royal Oman Police”.

When Bank Sohar was awarded first place within the private sector category it became the first financial institution in Oman to win the prestigious award. The accolade was presented to the bank in response to the originality, effectiveness, and overall success of the campaign.

On receiving this commendation, Mr. Mazin Mahmood Al Raisi commented, “The ‘Rakiz Wa Souq’ (Focus and Drive) Road Safety Campaign was launched in-line with the national agenda for reducing the number of traffic related accidents, taking an approach of generating greater awareness and advocacy amongst local stakeholders and the young generation in particular. Over the years, we have launched this endeavour on a rather sizeable scale with nationwide campaigns that utilize the strength of traditional and digital media channels in collaboration with government authorities, including Royal Oman Police, Oman Road Safety Association, and the Public Authority for Radio and Television. Winning the contest is an outstanding achievement for Bank Sohar and all who have supported as partners pledged to this common cause.”

A key driver for the campaign was its high levels of engagement in both online and offline channels with great results witnessed in the bank’s various social media contests on its official Facebook, Twitter, and Instagram accounts. With a view to generating sustainable outcomes, the campaign further employed children as ambassadors, in order to position them as influential players for reinforcing important safety messages to older generations.