As part of Bank Sohar CSR largesse outlined under Sohar Al Atta, the Bank recently supported the Omani Diabetes Association. The funds will go towards the purchase of glucose meters and height and weight scales of the association’s 2018 campaign on Diabetes. 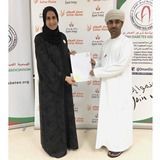 Commenting on the bank’s commitment towards under-privileged sectors of society, Ms. Munira Abdulnabi Macki, Bank Sohar’s GM – HR and Corporate Support, said, “We firmly believe in giving back to society and empowering those sections of the community with the right opportunities and access to enhanced facilities in healthcare, education and living standards. Bank Sohar has been a strong voice in the local community for programmes that support underserved sections of society and assisting an awareness campaign on crucial health related topics such as Diabetes forms part of our CSR goals under Sohar Al Atta. We share the same objectives as that of the Omani Diabetes Association in generating patient advocacy, providing medical support and facilitating communication among those in the private sector who are invested in the nation’s health.”

Dr. Noora Bader Al Busaidi, President of the Oman Diabetes Association, thanked the bank saying, “We are grateful towards Bank Sohar for once again assisting us with the purchase of life-saving equipment in the diagnosis and treatment of diabetes as well as for their support towards our awareness campaign. We are happy that they are setting a precedent for the private sector to be proactively involved in the health of the nation and look forward to their continued support.”

Last year Bank Sohar contributed towards the purchase of five special vital signs monitors, four flat scales with cabled remote display and four portable stadio-meters. The gesture falls on the spectrum of a broad category of similar outreach programmes that the bank has successfully launched that provides much needed resources to charity and aid organisations across the Sultanate. They range from child care centers, associations devoted to disability causes and charity associations and much more.

Over the years, Bank Sohar has supported over 30 organisations numerous times around the Sultanate under its social responsibility program striving to ensure that its contributions are carefully planned and evaluated in order to diversify and reach the maximum number of people - especially those in most need of it - offering recipients positive support and making meaningful change.

In recognition of its contributions, Bank Sohar has received numerous accolades for its CSR efforts locally, regionally, and internationally. The most recent of these awards was the ‘Golden Order of Merit in the field of CSR’ from the Arab Organization for Social Responsibility in UAE. This award is the fourth that the Bank has received from the Arab Organization for Social Responsibility for this category.

The Omani Diabetes Association is a voluntary, non-profit association established in 2005 by a group of endocrinologists as family health doctors. The association works to raise awareness and educate society on diabetes and to reduce incidence of the condition.

Its chief objective is to build channels of communication with its various partners - in the health industry and the private sector - to provide medical support and proper treatment. It also endeavours to support scientific research projects related to the diabetes, encourage volunteer work in the field, conduct regular training for doctors specialising in treatment and liaise between similar organisations in the Gulf and around the world.