Bank Sohar was honoured by the Ministry of Sports Affairs for extending its support towards the national football team upon winning the recently concluded 23rd Arabian Gulf Cup in which Oman claimed a resounding victory. The event was held under the auspices of His Highness Sayyid Haitham bin Tariq Al Said, Minister of Heritage and Culture and was organised by the Ministry of Sports Affairs in cooperation with the Omani Football Federation at the InterContinental Hotel on Tuesday. 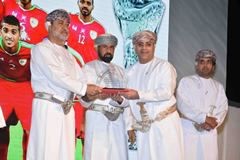 Dignitaries present during the event included Their Excellency, the Presidents of the Sports Federations and Committees and a number of guests. Representing Bank Sohar at the event were Mr. Mujahid Said Al Zadjali, DGM IT & Alternate Channels, Mr. Mazin Al Raisi Sr. AGM - Head of Marketing and Customer Experience and Mr. Abdullah Al Mahmoodi, Chief Manager of Events and Promotions.

Expressing gratitude for being awarded commendation for the bank’s support, Mr. Sasi Kumar, Acting CEO, Bank Sohar said, “On behalf of the bank, I would like to express my heartfelt gratitude towards the Ministry of Sports Affairs and the Omani Football Federation for conferring such high honour in recognition of our support towards the national football team. But the truth is we could not be more proud to assist and encourage our very own national football superstars who battled it out in true sportsmanship to bring home the Gulf Cup. We salute their achievement and extend our sincerest congratulations to them. As a bank that is deeply committed towards creating enriching opportunities for youth, we have adopted an extensive framework of cultural support to help Omani youngsters reach their potential. The field of sports is one area which we keenly support, because it is intrinsic with the very social fabric of Omani culture, and, we always pride ourselves on being a community oriented bank.”

The event paid tribute to the national team and companies that supported its participation in the tournament. Dutch Coach Pim Verbeek expressed happiness over the team’s monumental triumph and thanked the organisers for their support. Following a traditional vocal performance in their honour, the champions happily handed out autographs to cheering fans. --Mr. Mujahid Said Al Zadjali, DGM IT & Alternate Channels from Bank Sohar accepted a commemorative shield from His Highness Sayyid Haitham bin Tariq Al Said, Minister of Heritage and Culture.

Ms. Munira Abdulnabi Macki, GM – HR and Corporate Support at Bank Sohar’s further emphasised the organisation’s commitment towards developing youth and communities, saying, “I would like to begin by thanking the organisers for presenting us with this token of appreciation. As a bank that is keen on empowering Omani youth, we have always built capabilities across various social demographics to create abundant opportunities for talented youth to excel and grow. The Gulf Cup is a shining example of how important it is that financial institutions and corporate Oman play a supporting role in the development of the nation’s talent. As this phenomenal victory by Oman’s national football heroes shows, there is no dearth of sports and athletic potential in Oman and we are committed towards optimising every ounce of it. A final congratulations to the real stars of the event – the Oman football team; we have no doubt they will continue to do our nation proud.”

Oman emerged victorious for the second time at the Arabian Gulf Cup held in early January at the Jaber International Stadium in Kuwait. They ousted the United Arab Emirates (UAE) in the finals after a battle royale and a dramatic penalty shootout that led Oman’s football heroes to an astounding victory.