Sohar International has kept pace with the local population’s growing interest and participation in sports activities as well as the increasing desire amongst the international community to travel to compete or spectate key sporting events. In line with its social objectives and to complement the government’s efforts to promote Oman as a key sports destination, Sohar International has signed a partnership agreement with Triathlon Middle East to be the Official Sponsor for the prestigious IRONMAN 70.3 OMAN MUSCAT taking place from the Shatti Al Qurum beach-side district on 4 February 2023. The IRONMAN 70.3 OMAN MUSCAT sponsorship agreement was signed at an official ceremony on 8 January 2023 at Sohar International’s Waterfront branch at Shatti Al Qurum in the presence of Mr. Khalil Salim Al Hedaifi, Chief Retail Banking Officer at Sohar International, and Mr. Mohammed Al Obaidani, Chief Executive Officer of Triathlon Middle East (TRI.ME) – who are the leading sports events company organizing IRONMAN 70.3 OMAN MUSCAT.

Commenting on the partnership, Mr. Khalil Salim Al Hedaifi, Chief Retail Banking Officer at Sohar International said, “The sports industry was identified as a strategic sector with infinite potential to not only contribute to the tourism and leisure industry but also to position Oman as a country that reserves the capabilities, resources, and inherent zeal to host international sports events. In addition, events of such scale will also drive recognition in the international market, reinstating Oman as a country that promotes an active lifestyle. As a bank that is strongly aligned with the goals of the nation, Sohar International will continue to support the local sports industry through meaningful partnerships and impactful events.”

Mr. Khalil Salim Al Hedaifi added: “A key reason for Sohar International to sponsor the IRONMAN 70.3 OMAN MUSCAT are the strong ideals of determination, resilience, and commitment – which are demonstrated by each of the athletes competing in the series. These resonate very well with our own Sohar International ethics, and they have equal relevance, whether in a triathlon or in business. We commend the dedication of all the participants and wish them good luck.”

Furthermore, with the 2023 race’s start, transition zone, and finish all situated at the same location in Muscat’s scenic Shatti Al Qurum beach-side district, athletes, support crews and spectators can enjoy an action-packed race atmosphere in one central “stadium’’ style location.

Speaking at the signing ceremony, Mr. Mohammed Al Obaidani, Chief Executive Officer of Triathlon Middle East, explained. “Sohar International’s involvement as Official Sponsor of the event is another significant step forward for Oman and the Middle East region’s sports and endurance sports community. The IRONMAN 70.3 OMAN MUSCAT has a massive following throughout the world, so this event – which promises to be the first and biggest of its kind in the Middle East for the 2023 season – will showcase Muscat and Oman as a truly magnificent travel and sports destination. Oman is also blessed with many exceptionally talented endurance athletes, so the event will be a platform on which they can further develop their ability to perform among an elite line-up of the world’s finest triathletes.”

Previously, Sohar International had extended its support to one of its employees – Issam Al Busaidi – as he made his debut in the 2019 IRONMAN 70.3 event in Muscat. Backed by the bank, Al Busaidi recorded an excellent time and earned top honours as the first Omani finisher, and the second fasted finisher at the regional GCC level.

Through such endeavours, Sohar International has been at the forefront of extending its unfaltering support to promoting sports activities in Oman. By covering the full spectrum of sporting opportunities, the bank’s ongoing efforts have provided a boost to the development of sports facilities, enhanced the capabilities of local athletes, and contributed to the socio-economic goals of the country.

Athletes can find out more about the 2023 IRONMAN 70.3 OMAN MUSCAT event and register via the official page https://www.ironman.com/im703-oman 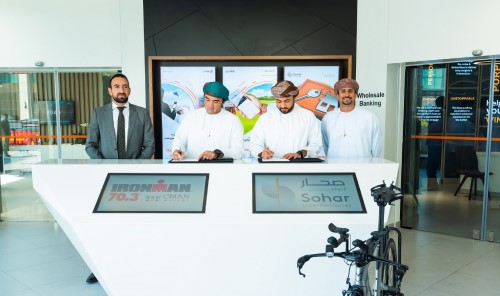