In line with its purpose of encouraging the spirit of ‘Winning’, Sohar International conducted several interactive activities during the Oman Open 2020 with the aim to encourage and engage with golf enthusiasts. Organized by the Oman Open Tournament Committee in association with The Oman Golf Association and sponsored by Sohar International as Gold Sponsors, the tournament brought positive socio-cultural and economic change by upholding Oman as an international sporting destination. 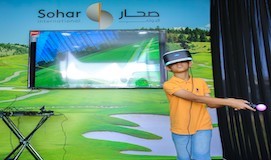 February 27th to March 1st 2020, with practice sessions and pre-event activities starting from the 24th of February 2020. As a part of the pre-event activity, the bank invited select customers to experience the spirit of winning by enabling them to play against professional golfers from the European Golf Tour in a ‘Pro-Am’ (Professional-Amateur) Tournament. A marquee with an interactive VR equipment was also setup at the venue to entice golf enthusiasts by allowing them to play the game virtually.

Speaking about promoting Oman as a sporting destination, Mr Ahmed Al Musalmi, Chief Executive Officer of Sohar International said, “Sohar International aims to support the government in positioning Oman as one of the best sport destinations in the world. We also understand the importance of sporting events as means of bringing communities together and generating economic benefits to the nation at large. With golf relished as a global sport, this gold sponsorship offers us with a great opportunity to establish Oman’s identity as an international sport destination.”

He further said, “With our vision to become a world-class Omani services company, our association with such global sporting event is in line with our company’s strategy in order to bring the best of the world to Oman and take the best of Oman to the world.”

This marked the third edition of the Oman Open Tournament with the previous two editions held at the same location. This edition too received a great turnout of participants from across the world. The event is estimated to make a significant impact to the economic scenario of the country with an estimated value of USD 26 million with 1,912 hours of dedicated broadcast coverage in addition to exceptional print and online coverage.

By supporting such global level sporting events, Sohar International has been actively supporting initiatives that strengthen the position of Oman on the world map and highlight the country’s various assets through sponsorships, public representation and financial support. Sohar international had also sponsored the Gulf Snooker and Billiards Championship held in Muscat, Oman with similar objectives.