In an emphatic testament to its journey towards becoming a world-leading Omani service company and marking its fifth award for the year, Sohar International was recently recognised for business excellence by the Oman Economic Review (OER) magazine at their ‘Top 20 Awards’. Representing Sohar International at the event was Mr Ahmed Al Muslami, Chief Executive Officer of Sohar International, and members of the bank’s executive management.

Held as part of the publication’s annual Business Summit, the awards were presented under 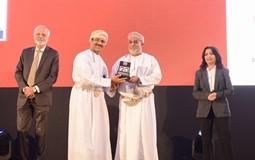 the patronage of His Excellency Yahya Said Al Jabri, Chairman of Board of Directors of the Special Economic Zone at Duqm (SEZAD), at a glitterati ceremony at the Shereton Oman Hotel. Mr Ahmed Al Muslami, received the award on behalf of the bank at the premium event that witnessed the coming together of over 150 government and private sector officials and the nation’s biggest industry names.

Commenting on the significance of its victory at the OER Top 20 Awards, Mr Ahmed Al Muslami mentioned, “Sohar International is on a winning spree, and is honoured to be counted among the nation’s Top 20 Companies; which has resulted in us being presented with this coveted award for business excellence. Given our vision to be a world-leading Omani service company, that helps communities and people to prosper and grow, we invest heavily in providing customers with more vision, more value and more velocity through our products and services. Cementing a place in the OER Top 20, serves as further motivation to continue in our odyssey towards excellence and winning; and is a strong affirmation that we are on right path in our newly invigorated strategy. On behalf of the bank, I would like to thank all stakeholders for their trust in Sohar International and OER for recognizing Sohar International’s contributions to the Sultanate’s business landscape and overall socio-economic progress.”

In 2018 the bank closed on a strong and remarkable note with a net profit of RO29.36mn, in comparison to RO25.33mn in 2017, a notable increase of 15.9 per cent. It is important to note that more recently; the bank’s performance has continued to reflect this positive trend where the bank has recorded net profit increased for the six months ended 30 June 2019 by 32.91% compared to the same period in 2018.

In its 10th edition this year, the OER Business Summit were organised under the theme - ‘Oman: Catalysts for growth’; and reflected upon International Monetary Fund’s prediction about Oman becoming the fastest growing economy in the GCC in 2019. The event also witnessed deliberations on how certain catalysts for growth can help the Sultanate maintain this economic momentum in the coming years.

Armed with a firm focus on customers and market demands, Sohar International has received numerous local, regional and international accolades since inception. The Bank has been conferred with three awards at the AIWA Awards that were held last week - “Lifetime Achievement Award” in recognition of the outstanding leadership of its Chairman Mohammed Mahfoudh Al Ardhi; the “Best Performing Company” award in the Large Segment Category; and the “Best Corporate Social Responsibility Campaign” award for its #WinningTogether Ramadan Campaign.

During the course of this year, Sohar International has been conferred with the prestigious ‘Excellence in New Brand Identity Award’ at the Oman Banking & Finance Awards 2019, as well as adjudged as a frontrunner under the Innovative Custom Components category at the fifth edition of the Infosys Finacle Client Innovation Awards, and has also recently won the Oman Best Brand Award for Brand Leadership by CMO Asia.