Corresponding to its vision of ‘helping people win’, and its commitment towards encouraging prudent savings culture in Oman, Sohar International recently conducted its November Monthly Draws worth RO 100,000 under its Sohar | Prize Scheme 2019 in the Wilayat of Khaboura to engage and interact with customers in the region.

Conducted under the “Now That’s Winning” theme, this month’s draws revealed the names 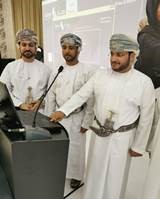 of four winners under the General and Wealth Management categories. Attended by a number of the bank’s customers, the event was organised on December 11 at ‘Al Jawhara Hall’ at the Wilayat under the patronage of Shaikh Malik Sulaiman Mohammed Al Malik, Deputy Wali of Al Khaboura.

The event proceedings began with a welcome note by a representative of the bank followed by a speech by Mr Rashid Saif Al Maskry, District Manager of Batinah Region. The evening also witnessed an entertainment program such as poetry recital followed by the announcement of the monthly draws and announcement of the four lucky winners; B. A. and Salim Ali from Wealth Management segment and M. S. and F. S. Al Balushi from the General segment. Following to the announcement of the winners, the Guest of Honour, Shaikh Malik Sulaiman Mohammed Al Malik was presented with a gift as a token of appreciation by Mr Rashid Saif Al Maskry.

Speaking about the intent behind organizing such event, Mr Khalil Al Hedaifi, Chief Retail Banking Officer of Sohar International, said, “Our monthly draws under the Sohar | Prize Scheme serves as a great platform for us to interact directly with our customers besides offering them with more ‘winning’ opportunities while urging them to nurture the healthy habit of saving. These opportunities help our customers realise their dreams while aiding them in transforming their lives, and consequently contributing to the overall prosperity of the Sultanate.”

He further added, “On behalf of Sohar International, we would like to congratulate the winners of this month’s draw. I hope winning the draw motivates them, as well as our other customers to continue saving as a mean to secure their future, as well as that of their families. With the upcoming Year-end Grand Draws, we encourage our customers to continue this healthy habit of saving whilst maximizing their chances of winning”.

Providing customers with more value, Sohar International also conducts other regular draws including Weekly Draws of OMR 4,500, Quarterly Draws giving away OMR 200,000 in total; that are equally split between two customers from the General Segment and two customers from the Wealth Management Segment. The biggest prize of the year given by the bank in 2019, however, are the Year-End grand draws, that will give away a total of OMR 400,000; that will be distributed equally between four customers; two from the General Segment and two from the Wealth Management Segment.

By persuading its customers to keep saving and by subsequently rewarding them for that, Sohar International is trying to make a positive impact on a national socioeconomic level. By raising the bar on customer-centricity and helping customers win and achieve their goals in an ever-changing world, the Bank is constantly pushing boundaries in redefining the way banking is conducted in the country.