Acknowledging its continued delivery of banking excellence in the Omani market, Bank Sohar was acknowledged as one of Oman’s ‘Best Performing Companies’ at the Alam Al-Iktisad Wal-Amaal (AIWA) Awards in its 10th edition. The event was held recently at the Sheraton Hotel Muscat under the patronage of His Excellency Dr. Rasheed bin Al Safi Al Huraibi, Chairman of Oman Tender Board, who attended as the Guest of Honour alongside over 180 senior executives and officials from the public and private sectors. The bank received the accolade in competition with 25 highly competitive firms for the Large Capital category. 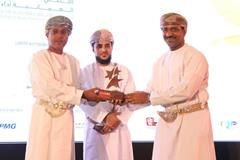 Receiving the award on behalf of the Bank, Mr Ahmed Al Musalmi, CEO of Bank Sohar, said, “We are honoured to see our achievements recognized with such a prestigious accolade, underscoring an exceptional year of growth across a number of verticals. The bank continues to deliver extensive enhancements to its service provisions under a robust strategy to become the most customer centric bank in Oman. Between our nationwide network expansions, upgrades to our technological infrastructure, new-dedicated customer experience assets, and increased digitization and online stakeholder engagement, the bank ushers in a new era of banking excellence as it continues to secure greater market trust.”

Organised by Alam Al-Iktissad Wal-Aamal magazine, the awards are based on the financial performance of companies in the preceding year. In 2017 Bank Sohar reported a growth rate of 32.54% with increased performance and value across a variety of assets and financing activities, as well as an increase in net interest income to the value of OMR 47.721 million.

He added, “I offer heartfelt thanks and congratulations to the Bank Sohar family for their contribution to the bank’s on-going success, as this is a reflection of the excellence we aspire to achieve each day. Bank Sohar’s excellence is a demonstration of our innovation and dedication to nurturing the growth and competitiveness of the banking sector on a national scale”.

By maintaining a keen focus on the fundamentals of best practice, including the review and enhancement of policies and procedures, Bank Sohar has consistently delivered upon its promise for service excellence. Coupled with a firm focus on customers and market demands, Bank Sohar has continuously received local, regional and international recognition over its 11 years of operation, including AIWA awards for its performance in 2011, 2012, 2013 and 2016.

The AIWA awards are considered a source of inspiration for companies listed on Muscat Securities Market to consistently improve their performance in-line with the national agenda. AIWA felicitate a select number of companies and corporate leaders for significant socio-economic contributions. Winners are announced following its annual survey of entrants, conducted in cooperation with Gulf Baader Capital Markets, and an audit by KPMG. Inaugurated in 2011 the AIWA Awards have been honouring high performers from the upper echelons of Omani enterprise in conjunction with Alam Al-Iktissad Wal-Aamal, the nation’s leading Arabic business magazine.