Taking its national day celebrations to a national level, Bank Sohar has launched a new social media competition highlighting milestones in the evolution journey of Oman’s banking sector, with valuable gold coins to be given as prizes for a total of five winners. 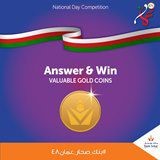 Reflecting the progressive spirits of the nation, the themed competition saw a question-answer based competition ensue on Bank Sohar’s official social media accounts, notably Facebook, Instagram, and Twitter. Using the hashtag (#بنك_صحار_عمان48), the contest will see five questions asked over a period of five days that started on 18th November 2018.

Commenting on the competition, Mr Mazin Mahmood Al Raisi, Senior AGM and Head of Marketing and Customer Experience at Bank Sohar, said, “Amidst the festivities and celebrations taking place nationwide, Bank Sohar wanted to spur the excitement of local communities by hosting a competition to remember. Honoring the wise leadership of His Majesty Sultan Qaboos bin Said, the competition highlights the progress of the banking sector within the country - a backbone of the nation’s overall economic development over the past four decades. We raise our warmest felicitations to His Majesty Sultan Qaboos bin Said and congratulate the people of our Nation on this joyous occasion as well as wish all participants the best of luck in the competition.”

Upon conclusion, the competition’s eligible participants will enter into a computerized prize draw from which 5 lucky winners will be contacted by direct message on the relevant social media platform for details on collecting their prize. People wishing to participate must follow Bank Sohar’s account on the social media network they wish to enter from and use #بنك_صحار_عمان48 when posting their answers.

The National Day social media competition echoes the spirit of many other celebratory activities hosted by the Bank on this occasion. On the joyous occasion, Sohar Islamic celebrated the official opening of Sohar Islamic’s relocated branch in Al Waqaibah, Sohar, and a social gathering for customers, complementing the bank’s exciting monthly draws for customers partaking in the Al Mumayaz Savings Scheme.

Bringing the Sultanate’s heartfelt festivities to those unable to partake in person, Bank Sohar through its Sohar Al Atta CSR initiatives organized a visit to children under the care of Royal Hospital and presented them with gifts in a spirited commemoration of Oman’s 48th National Day.

Bank Sohar’s engagement with the public on social media reflects its firm commitment to the community. With a history of many successful social media competitions, the bank further seeks to bring added value to society not only through exciting prizes but also by promoting awareness on key issues and subjects. The bank’s most recent competition promoted the safety and wellbeing of students in Oman throughout their school day, covering various aspects such as healthy food, time management, safe commuting, exercising, and healthy sleep habits. Earlier competitions were held on the occasion of the Bank’s 11th anniversary, the Holy month of Ramadan and the World FIFA Cup.

Bank Sohar invites its customers to participate in the competition on its official social media pages, which can be found on Facebook at www.facebook.com/sohar.intl, Instagram at www.instagram.com/sohar_intl, and Twitter @sohar_intl.