As a part of its on-going efforts to promote traditional Omani culture and sporting events, Sohar Islamic, Sohar International’s Islamic window, recently sponsored the fourth Horse and Camel Festival, organized in commemoration of the 48th National Day in Willayat Ibra from 22nd till 23rd November under the Auspices of H.E. Sheikh Dr. Said Humaid Harthi, Wali of Khasab. 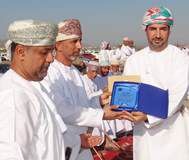 The event saw participation from across the Sultanate and other neighbouring countries, with contestants showcasing outstanding equestrian skills and beauty of horses and camels. The gathering was enriched by a selection of local handicrafts and cultural artefact exhibition, as well as presentations of Oman’s classical heritage from artisans and folk groups. During the closing event, Mr Mohamed Al Gharibi - Chief Branch Manager, Firq Branch, Sohar Islamic representative during the event received a token of appreciation from the organizers on behalf of Sohar Islamic.

Emphasizing Sohar Islamic’s commitment to society, Mr Salim Khamis Saif Al Maskry, DGM and Head of Sohar Islamic, said, “Empowering local communities whilst preserving local customs is one of our foremost mandates when making social investments. This event was of priority to Sohar Islamic as a celebration of the nation’s rich cultural heritage, and a valuable opportunity to promote the sport and the competitive spirit that goes with it. Our involvement in such events is to ensure that traditions endure, for the sake of cultural value and entertainment, but furthermore in regard to tourism, as traditional gatherings have proven to be of great intrigue to visitors, residents and citizens alike".

Sohar Islamic’s CSR activities feature an array of investments that aim to add value to various tiers of society. With a strong focus on youth and cultural values, Sohar Islamic has extended support to a number of community focused initiatives such recently sponsoring Al Makarem Football Academy in their participation in the Gulf Football Festival in Bahrain. Sohar Islamic also supported the Izki social gathering, Rattle wa Irtaq Quran memorization and recital contest, Ramadan Aman road safety campaign and others.

For general information about Sohar Islamic products, customers may visit any of the seven branches located in Muscat at Al Khoudh, Al Ghubra, Barka, as well as Firq in Nizwa, Saada in Salalah and Al Maabelah in Seeb, Al Waqaibah in Sohar. Alternatively, they can call 24730000 or visit www.soharislamic.net